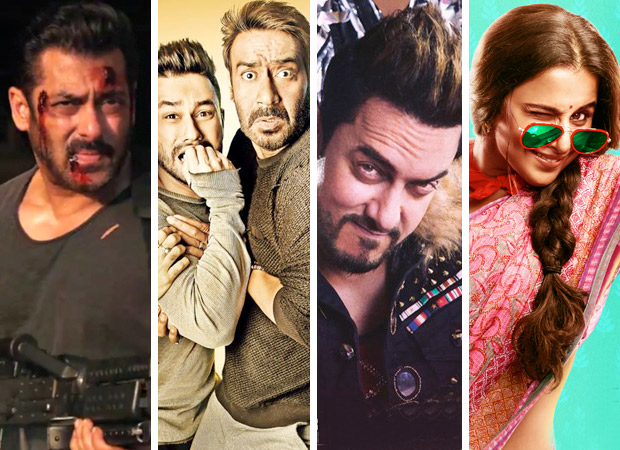 The last quarter (October to December) of the year 2017 maintained the extreme tenor of the rest of the year, seemingly bringing to life, in the context of Hindi cinema, a line from a Longfellow poem:

‘When she was good, she was very, very good

But when she was bad, she was horrid!’

Substitute the term ‘she’ with ‘Hindi movie’ and we glimpse the truth!

On the one hand, Diwali saw the blockbuster Golmaal Again, the first Ajay Devgn–Rohit Shetty film to cross Rs. 200 crore nett in India. Despite (expected ) criticism from the ivory towers (its time this building was permanently demolished for flouting Hindi film regulations!!) and (unexpected) flak from even some fans of the franchise, the film had this novel and enigmatic quality about it, which combined with the breezy pace and the festive mood, triggered off this super-success.

Shetty was lucky: he had to vindicate himself after the disastrous Dilwale, and he got what was as good as a solo festival release! And why do we say that?

We say it simply because the other Diwali movie, Secret Superstar, was a serious drama and a small film. Though sold at a price influenced by Aamir’s superstar presence by Aamir himself (which cut into its margins of profit as well), the film could not possibly be competition when audiences want bright, ‘cracker’ jack entertainment during the festival of lights.

For an Ajay-Rohit combo, this was a hat-trick of Diwali triumphs of mass entertainers against serious superstar biggies: his All The Best had won against Blue and Mr & Mrs Khanna in 2009, while Golmaal 3 had trounced Action Replayy in 2010! Next time, filmmakers, do think of what we prefer during Diwali!

And then came the Christmas (a season associated with record-smashers since 2009’s 3 Idiots) bonanza with Tiger Zinda Hai. This feature comes a shade late as we waited to see if the third Yash Raj Films–Salman Khan combo broke the Rs. 300 crore barrier, and lo and behold, it so easily did. It is so easy to attribute this to the lack of opposition. But that was of lesser consequence than the fact that, like all action dramas that turned mega-spinners right from Farz and Ankhen in the 1960s, there was a strong, emotional core.

Add the lethal combination of YRF’s marketing, the acumen of Ali Abbas Zafar, Salman Khan’s clout and the compensatory anticipation of his fans after Tubelight,  and we know why this film shot past even cinematically-weightier Khan products like Bajrangi Bhaijaanand Sultan (also with YRF and Ali).

After all, for the first time since Kick four years back, his fans saw Khan in a full-fledged Rambo-like role, in which is always loved, come Wanted, the Dabangg franchise or the TZH prequel, Ek Tha Tiger. And when the action standards are almost on par (given the fraction of budgets) to Hollywood extravaganzas like the Mission Impossible or X-Menfranchises, it is an icing on a delicious cake for all!

Fukrey Returns, now poised around the Rs. 80 crore nett, was the only other genuine super-hit, and the low production budget coupled with a non-star cast helped it grow big. The first part was claimed to be a sleeper hit (‘No comments’ is our comment to that!), but the undeniable fact was that the youth had liked the prequel and loved the characters. As its following grew, so did the filmmakers’ (producers Ritesh Sidhwani and Farhan Akhtar and writer-director Mruighdeep Singh Lamba) desire to take the story forward.

And so we got a hilarious and screwball dark comedy that was as much an improvement over the original as 2016’s Pyaar Ka PunchNama 2, yet another youth-oriented ‘flick’. As the lead characters evolved (Varun Sharma was fantastic and Richa Chadha fabulous), Fukrey Returns, unwittingly, set the benchmark on how true sequels (where the story continues) must be conceptualized and executed— not just to make money but to give audiences the full value for theirs.

Then there was the unique case of the sweet and message-oriented Shaadi Mein Zaroor Aana. Clashing with another rom-com, the mediocre Qarib Qarib Singlle, it seemed to lose out completely, as even critics lent their bit to “an Irrfan Khan film”—not that it did QQS any good.

However, astonishingly, and bettering Happy Bhag Jayegi in 2016, Shaadi… added 100 more screens (!!) in week 3, in part because of some innovative digital promotions. And until mid-December at least, the Nov.10 release was still running even in Mumbai, and with its slim budget, chances of recovery or a tiny profit, are very likely. Thematically and content-wise, Shaadi… fell in the same bracket as three earlier winners, Badrinath Ki Dulhania, Bareilly Ki Barfi and Shubh Mangal Saavdhan.

Tumhari Sulu, a slice-of-life film with a gender-equality credo, also made the grade with its decent performance—this writer recalls a crowd at a Mumbai multiplex even in the third week during a non-primetime show. Women quickly identified with the middle-class and seemingly impossible dreams of a normal hausfrau. A more logical narration could have made this film a huge hit.

And nothing else to show!
Subhash Ghai, the man who never directed a flop between 1982 and 1999 (and gave just one flop in five films before that!), has just tweeted a query: “Why were 257 films flops? Analysis is necessary by writers directors n Producers to know our real audience taste.”

He couldn’t have uttered a truer and timelier word!

Ittefaq was a bad idea (plot-wise as well) to begin with, and the star presence did not help the budgets of a film with even lesser potential than, say, a modestly-priced Hate Story franchise. A worse idea was Firangi, wherein Kapil Sharma craved to prove his versatility and talent. Hey, man, didn’t you know that comedy is the toughest part of acting, and moreover, you should have established yourself as a star before you tried to change your spots, that too with a contemporary quality product and not this dated melodrama?

Skin-flicks, too, have long lost their appeal, unless there is a solid story: and so Aksar 2, Julie 2, Game Over and even Tera Intezar did not even start off. The first film was, sadly enough, turned into a skin-flick while being made as a taut thriller, and so lost the plot—literally!

The one film that truly suffered was Chef, whose fate was sealed by its producers with absent marketing. A film where everything was just right for a slice-of-life subject (and a remake of a sleeper Hollywood hit as well!), it was literally left at the mercy of the fates, starting with its not-so-familiar title for pan-Indian regional audiences. Yet another good film that fell due to lack of awareness was The House Next Door, our best horror film in ages.

The rest of the ‘fare’ dished out to us was only a confirmation of Subhash Ghai’s contention: “Analysis is necessary by writers’ directors’ and producers to know our real audience taste!” And audience taste, most definitely, is not about Ranchi Diaries, Jia Aur Jia, Ribbon, Sallu Ki Shaadi or Monsoon Shootout.